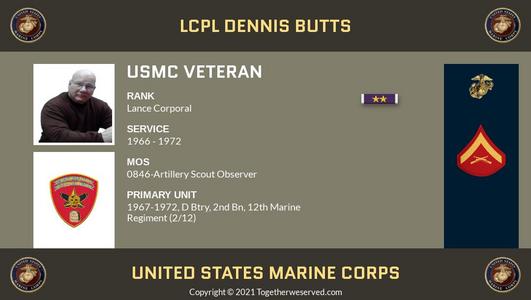 Dennis M. Butts' Now I Understand Seminar and Mentoring Programs are designed to provide a basis for understanding of combat veterans, and the people they interact with on a daily basis. This can be family, educators, law enforcement, employers, relationships even the general public. The purpose is not to treat the veterans, but to help those who interact with our heroes be able to understand them, and why they may or may not react the way that you would think they would.

Families often say that their son, daughter, husband or wife is not the same as before they were deployed, and they don’t understand them. They don’t know who they are any more. I have a saying, "When someone goes to war and is in combat, that person never comes home." They may look that same, sound the same, and in many case act the same. However, they are not the same person, and cannot be treated as if they are. They are combat veterans. A very unique person. A hero, who may not like that word. Trying to change them is not your job or ours, but rather to understand what has made them who they now are. "Now I Understand" is so important.

Mr. Butts begins all of his programs by talking about his own changes, and exposing his experiences in and open and candid way that allows the audience to become comfortable and open to questions and deal with the true issues they are confronting.

The seminars and lectures are so critical with all of the returning troops and military personnel being discharged. Yet, with so many conflicts that our troops and families deal with through deployment, or just the thought of deployment; the families and troops can begin to understand the changes that will take place within.

This is our goal and mission: For everyone who works, loves, or goes to school with a combat veteran to be able to say, "NOW I UNDERSTAND!"